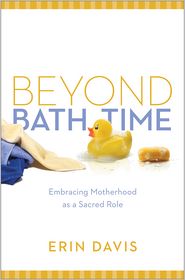 Motherhood is under attack. Nearly one in five American women ends her childbearing years without having borne a child, compared with one in ten in 1970. In 2007, among Christians, 47% felt that the roles of marriage and motherhood should not be emphasized for women. And unfortunately, the church isn’t talking about why motherhood matters, nor is it equipping young mothers to see their family as a mission field. Erin Davis was a young Christian wife who had made the decision to not have children. She had multiple degrees, a great husband, a promising career — she had it all — at least according to cultural standards. But most days she felt anything but fulfilled. In Beyond Bath Time Erin shares her journey to the place of true fulfillment in responding to the call of motherhood. Women will be challenged, convicted, and wonderfully encouraged by Erin’s honest and provocative look at motherhood and its divine call.